What a historical day! September 12, 2018, marks exactly 35 years of my entering the U.S.A. on September 12, 1983, and my exodus from Lebanon. Our flight for our arrival back to Beirut Airport was Ottawa-Montreal-Geneva-Beirut. For some reason, our flights from Ottawa and Geneva were delayed, however, we were able to make the connections and arrive in Beirut at about 5 p.m. instead of 4:30, but Gary and I were the very last individuals standing in line to pass Lebanese customs. It was interesting to have a customs officer come and stand next to us as the other officer was stamping our passports. The one standing next to me was attempting to plan his weekend from Wednesday and make sure that someone will replace his shift for the weekend. When I tried to ask a question, he looked at me, as if I was a bother and expressed with his gestures for me to wait a minute and talk later. He did not realize that I understood every word he said even though I spoke to them in English. This is the joy of speaking/understanding different languages. We humbly carried out what was required and without any issues, we went through, picked up all five suitcases, of which only two will be coming back home with us, and went to the waiting area.

I saw my nephew, Roudy, whom I have never met, but thanks to Facebook, we communicated with him through video chatting, therefore recognizing him was easy. He has a small car, but miraculously and with strength and perseverance, he put three suitcases in the trunk, and two on the back seat along with our carry on luggage and I sat

in the back, looking like a little head lost in the world of suitcases. He turned on his air conditioning and we started our twenty-minute journey to Bourj Hammoud with joy and anticipation for some good Lebanese food, as my sister was waiting for us to have supper. I can feel the car almost touching the ground as it was weighed down by the suitcases.

The journey was longer than the regular twenty minutes as roads were blocked and traffic was horrendous. The car started releasing hot air instead of air-conditioned air, so we opened the windows and turned off the A/C. We continued to crawl with the traffic. Now that our windows were all open and the air outside felt pressing on us, with 100% humidity, we kept on drinking water that my nephew had with him for us. When other cars came next to us and saw me buried under a pile of suitcases, they smiled and said, “Hamdellah Salemi” which almost translates to “Praise be to God you are here safely”. These people stuck in the middle of traffic, where roads are blocked, were wishing us “Welcome Home”. After a few blocks of driving my nephew realized his car was over-heating and the temperature gauge was at its maximum. As soon as my nephew realized this, he pulled to an entrance of a car wash where a young adult in his early twenties was busy with his cell phone. My nephew asked if there was water he can buy, he pointed across the street where he can purchase bottled water. My nephew was worried about us and being hungry, so he offered us to stop and eat at the restaurant nearby, but the weather was so hot that we were happy with the cold water he just purchased. After he thanked the young man for his help and explained why we pulled over, the young man offered to use the pressure washer at the car wash and cool off the engine. He asked my nephew to pull the car into the car wash area and he turned on the water, a precious commodity, to help cool the engine. That was truly a gift to us, as the temperature gauge started to come down with this cold water and the help of the sunset. By 7 p.m. we were back on the road and driving through traffic. My nephew asked many people how to get to Jel-El-Dib as he knew how to get home, once he got to Jel-El-Dib. He lost his sense of direction on these streets because of the blockage, these streets were unfamiliar. We were truly lost but also welcomed on the streets of Beirut. A part of me was starting to worry, but another part of me kept on remembering that we are not alone, God is with us – keep calm and continue drinking water.

My nephew explained to us the reasons why the roads were all blocked, but I cannot keep up with all the political jargon in this place and for other reasons, we will not mention details about this horrendous traffic. There were soldiers that had set up checkpoints. We were asked to show identification at one of them. Roudy explained that his Aunt is visiting with her husband from Canada and that he picked us up at the airport – in other words, we have nothing to do with whatever else was going on the streets on this day.

My job was to look around and observe, ask questions, drink water, sweat, and ask Gary if he is ok, as he sat down in the passenger seat in the front. As I was observing my surroundings, I saw small donation boxes on iron posts. They had Arabic writing on them, but I could not figure out what it said in the middle of this chaos, so I asked what they are. Roudy explained that they were donation boxes to help the poor and show mercy to them. But do they really get to the intended destination? That is the real question. Many children approached our car selling CDs, bottled water, and different things when these kids should be at home doing homework for school. But do they even know what school looks like?

By 8 p.m. the sun was pretty much set and the streets were getting darker by the minute. At one point, Roudy asked for directions once again, he maybe asked for directions 10-15 times, he asked army soldiers, police officers, and the general public. After darkness had set, one man, to whom we asked for directions, asked my nephew, “What are you doing here?”. We must have looked out of place – we were looking for our way home, our temporary home, but nonetheless HOME. I thought to myself, maybe this is a good question for all of us, not just for us lost visitors in Lebanon, but all of us travelling on this life’s journey. 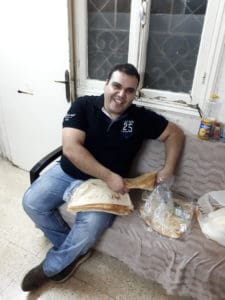 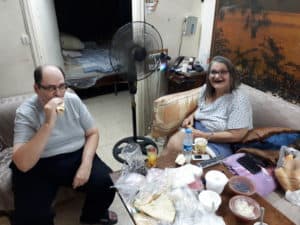 We arrived HOME after 8:45 p.m. and we were greeted with streets that were even narrower than the ones we passed through earlier in the heart of Beirut. This is not the Bourj Hammoud I remember – where I lived the first fifteen years of my life. If there were 3-4 cars parked on the streets in my childhood, that was too many. Today, every street seems to have shrunk and turned into a chaotic maze in search of life. Cars have taken over the streets and left no room to walk. While there is no need to hide from bombs today as we did in my childhood, but yet, in the first eight hours of arrival, it has become clear that everyone is in search of life, in search of sanctuary, in search of something they do not even know, however they still stop to help strangers to cool off their car engines, and welcome a foreign couple in their midst and saying, “Praise be to God, you are here safely”.